I really like pineapples. More often than not, when I go to Sam’s Club I’ll pick one up – the price tag is better than the ones on the pineapple at Kroger.

Pineapples are not only delicious, but good for you. Among other things, it contains a bunch of the following nutrients:

I’ll usually cut it up and eat it fresh, but when I want some fast, healthy dessert I broil it with some coconut oil, turbinado sugar, and cinnamon. Lots of cinnamon.

Cutting a pineapple at first can seem kind of intimidating, but a couple of times through and you’ll be a pro. For this particular recipe I cut them up into spears. For a how-to video, click here. 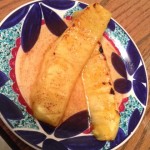 Place oven rack closer to the top of the oven and preheat oven to the high heat “broil” setting.

In a small saucepan, melt coconut oil over low heat and then whisk in sugar until it is melted and combined. It’s okay if it’s still a little bit grainy, it’ll melt the rest of the way in the oven. Stir in the cinnamon.

Lay the pineapple spears out evenly on a baking sheet (use parchment paper or silpat will make clean-up easier) and spoon coconut oil mixture evenly over the pineapple.

Pop the baking sheet in the oven and broil on high for 10-15 minutes, or until sugar caramelizes and edges of pineapple are golden brown.