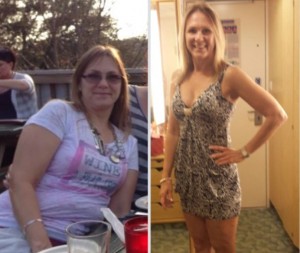 When I started my weight loss journey on January 1, 2013 I knew it was going to be a long road for me. I had become an empty nester, my marriage was falling apart and I had ballooned to 170 pounds on my 5’7″ frame. I was wearing a size 14 clothes, larger than what I wore when I was pregnant with either of my boys. I started the Paleo diet January 1st along with my own exercise program and running. My first month I lost 10lbs. I was ecstatic! As February and March went by the weight loss decreased and by the end of March I had lost a total of 22lbs but only dropped in clothes size down to a size 10. My friend Dena Anderson started talking about this place called CrossFit Hays. I have always been active in my life doing triathlons and I even adventure raced for years so it sounded appealing to me. So, on April 1, 2013 I joined CrossFit Hays. I knew I still had 13 lbs to lose to reach my personal goal of 35 lbs lost but losing weight had slowed down a lot with just what I was doing for the last 3 months. I knew I would probably lose the 13 lbs but I had no idea what else I would lose and what I would gain. By the end of July I had lost all 13 lbs AND an unbelievable amount of inches. I had gone from that size 10 to a size 7. August rolled by and every time I turned around I was going back to the store for smaller jeans. At the end of September I was officially a size 5. I have since even bought a few 4’s, but now at age 52 I can shop in the juniors department and fit into a 5 no problem (junior clothes are way cuter than misses lol). What did I gain you ask? I gained some amazing friends, Jennie, T, Chris, Lauren and a phenomenal coach named Wayne Hamilton who pushed me to be better than I was. I also gained an amazing amount of self worth, confidence, and strength. I look forward to continuing my journey with CrossFit Hays. I am excited about the future and where it will take me.